So, sometimes it’s impossible to shake off an idea. An idea for a piece of work just stays in your head, often goes through various changes as time and thoughts progress, but the concept remains the same and stays with you.

Well, I’ve had a yellow disc dangling from the ceiling in three different studios now, a blue sheet draped in the air, and a kaleidoscope tacked to a window. They relate to a series of three sculptural works all inspired by the perspective offered by time spent in the great outdoors. 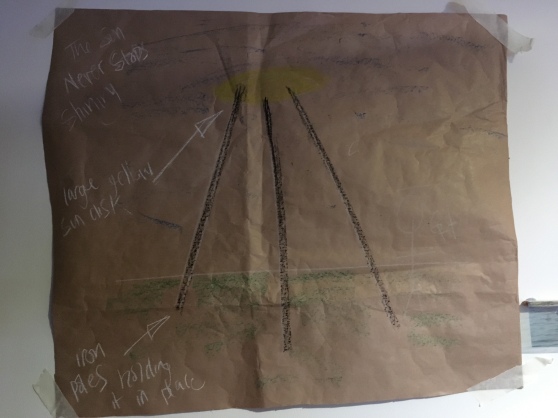 The Sun Never Stops Shining is a bright yellow transparent disc that towers overhead offering shelter, and a space for reflection. Through the grey days, life’s difficulties, and hard times some things remain constant, wether one’s aware of them or not – the sun never stops shining. Get out, soak up some essential vitamin d, feel the breeze on your face!

Similarly, Look Up! offersa place to shelter, to gather, to chew the fat, and contemplate. A place to look up from one’s smart phone, to interact with real people, real environments, in real time.

The kaleidoscope idea (working title, Chasing Rainbows) is far from being fully resolved, but it won’t go away. I just know that I want to create a piece of sculptural work that uses prisms to catch and reflect light. A piece that can be approached from any angle, and reveals the “magic” of daylight – the beauty that exists in the simplest things – the beauty that exists in nature!

Never before have I found it as easy to lose perspective on pretty much everything as I have since I became a mum. Motherhood, the most important, all-consuming job I have ever taken on deserving of our very best efforts – no pressure!

It would seem that it’s not just me that’s struggling (she says, putting things into perspective), ordinarily level-headed women around me appear to be struggling with this too. I think much of it is magnified by sleep deprivation (my hubby keeps joking that there’s a reason it’s such an effective form of Chinese torture!), but possibly also by lack of support… And that’s a strange thing to quantify, support. How much one is getting, how much one needs.

One of the reasons I feel lucky to have grown up in a village is because I was part of a relatively close-knit community that comprised people of all ages and many different walks of life. Observing many different people in action offers perspective, and my friendship circle has always been made up of people of all ages and backgrounds, good, interesting people that help me view life from a different perspective. Yet here I am, in a city, surrounded by so many friends, but mainly hanging out with new mums of a similar age, from similar backgrounds… And I fear we’re just tying ourselves up in knots as our mums aren’t down the road, Aunty Soandso isn’t around the corner, Old Mrs Jones isn’t passing by, those friends that have known us since school aren’t around, we’re not bumping into our old babysitters… And so we’re lacking perspective, and I don’t think this is a great thing.

I watched a programme the other night about the war artist Paul Nash. In it the narrator looked at the influence of surrealism on Nash’s work when he was struggling with psychological problems after the Second World War. Made me think of Dali’s twisted reality, out of perspective…

A few weeks ago I had an exceptionally low day, but was snapped out of it by a lady who picked up a slug from a busy thoroughfare so it didn’t get trampled to death. This is the sort of thing that I would usually do, but I hadn’t even clocked the slug. I was, and remain, so grateful to that lady for the perspective that she showed me that day, saving a precious life.

My Gran used to say to me, “There’s allus someone wuss off than yaself.” She was right, of course. That’s not to say that it’s not ok to struggle, that’s not what she meant, she was just trying to give reassurance, help put things into perspective, and she always did. I miss her.

This morning I read a blog entry, the last blog entry that Charley would ever make.

Blog: Life as a semi-colon

If that doesn’t offer perspective I don ‘t know what does. Hope you’re enjoying those chocolates and that Piña Colada, Charley. Thank you for your words and for sharing your admirably clear perspective. x x

Looking back at the artists whose works caught my eye at the London Art Fair, I can only think that I was hankering after a bit of time in some wide open spaces. For me, there certainly is no place like home – the sights, sounds, smells of the North York Moors. The relative lack of people, and the abundance of natural activity that always leaves me with a clear head, and a healthy dose of heavy-handed perspective. I just love it. Anyway, after starting the year with five days back home, I can only think that my interest in the below listed artists had something to do with how much I enjoyed my time there, and how much I get out of the experience of being alone in wide, open spaces… 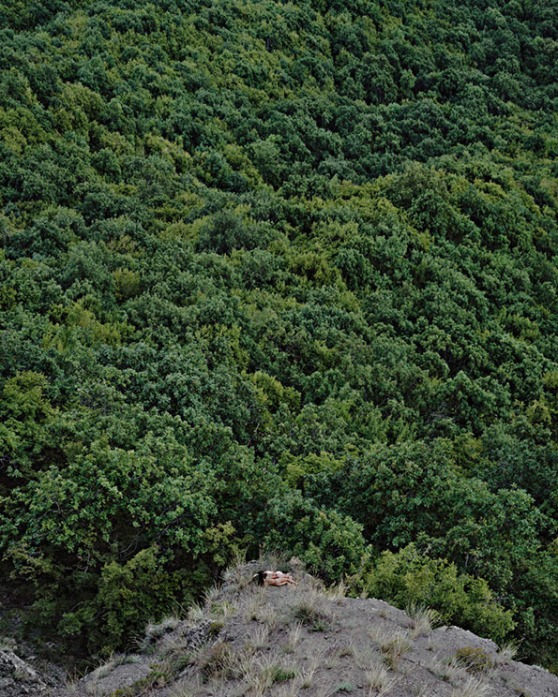 I hadn’t come across the work of Ruben Brulat (above) before. He’s a young French artist represented in the UK by Lamb Arts, and his large-scale photographic works are simply breathtaking. Such tremendous physicality dwarfed by all-encompassing natural landscapes… and more often than not it is actually him in the photo.

I found some scribbles about his work on thisispaper.com that may be of interest…

“Ruben Brulat’s approach has something romantic to it, romantic in the nineteenth century sense. His work ist that of a lonely, fanatic and mystic person, who’s thrown himself into a quest that confronts him to the limits and that opens the doors to a new apprehension of the world.”

At the other end of the scale I also really enjoyed Gill Rocca‘s miniatures – quietly dramatic experiments in scale.

Probably the work that I enjoyed the most at the fair was that of Leonardo Drew, represented by Vigo Gallery.

This image does his fantastic wall-based sculpture no justice at all – check it out in person if you can.

Again, this image does very little justice to the work, but Andrew Mackenzie’s woodland scenes resonated with me, with their flashes of glaring neon, that I guess either act as warning beacons or lure the viewer in – they made me want to adventure inside them, and clamber through Mackenzie’s invisible yet tangible bracken beds in clarty clay-clad boots.

Have a read of this interview that I found with Andrew Mackenzie here.

Heading to the opposite end of the country to North Yorks I found myself looking out to sea admiring the mystical, painterly work of Cornwall-based Gareth Edwards, and also the late Wilhelmina Barns-Graham and Karl Weshke, two great artists who also made their mark in/on Cornwall.

Look, the Sky is Blue, It Never Stops Shining, and Let There be Light are ideas for a series of large-scale public-space installations for urban spaces that loom over the viewer given a physical sense of wonder that can be moved around, marveled at, and explored. The intention of the series of sculptures is to reconnect the viewer with nature and their environment by reminding them of the elements, and in an attempt to encourage people to take time out to think, and physically lose themselves in perspective.