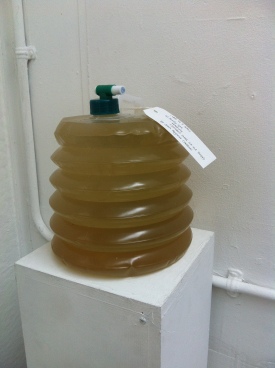 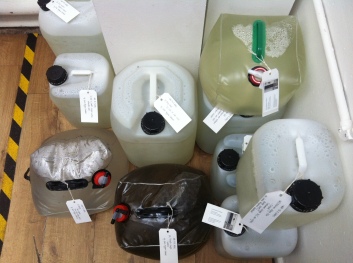 Mayhew Craddock became intrigued by canals, and the history of the canal network, when she moved to Birmingham in 2005. Venturing down the Grand Union and along The Oxford Canal the artist moved to Oxford in 2008, and became enthralled by Oxford’s hidden secrets.

Captivated by the idea that charged personal histories build up idiosyncratic languages that are mostly hidden from view, buried in the sediment that lies beneath the slow flowing surface water, Mayhew Craddock ‘bottled’ unsettled waters for public examination, in doing so highlighting the layers of history that make up The Oxford Canal (once one of the UK’s most important arteries of trade that was later threatened with closure as commercial traffic subsided before pleasure boating became popular) and draws parallels between the canal and the viewers’ own personal histories.

After spending time researching the history of The Oxford Canal the artist uncovered stories whose course has dictated its meandering shape, its physicality, its locks, its railings, its paths, its warning signs, its lifebuoys, its beauty spots, its cottages, its cottaging etc. throughout the canal’s history. Presenting water samples collected from points along the canal, Wait ‘til it Settles is an installation inspired by the dark layers of mystery identified in the curious, gentrified, quietude of The Oxford Canal as we now know it.

After the wettest January since records began more than 100 years ago the artist became intrigued by the way in which the winter’s extreme weather changed the nature of The Oxford Canal. Finding parallels between the canal, and one’s consciousness (or lack thereof) of the various different layers of human existence; that is, the way in which nature can intervene to mask, reveal or dictate direction. Furthermore, that one is frequently only conscious of what is taking place at surface level, failing to acknowledge the impact of what lies beneath or above that plane.

Re-adjusting her view of water Sarah began thinking of water in a different way, ordinarily so carefully preserved and measured, weather reports that winter had revealed polluted, overflowing excesses of water along the country’s waterways, and many of the paths that she used along the Oxford Canal became impassable. Wildlife conservation, that makes up the beauty spots found along the country’s waterways, was one of the things being blamed for water channels not having been sufficiently dredged over the past few years, and consequently unable to channel the quantities of water properly.

In an attempt to capture and preserve this ‘bad’ water, the artist sourced water butts, and containers, vessels usually used to capture and contain ‘good’ water, filling them with canal water, and the various layers of history churned up by moving these portable vessels. Mayhew Craddock found it intriguing to observe how quickly unsettled waters resettled in their containers, giving the impression that, in the event of an emergency, one might be able to wait until the muddy waters settle and then siphon the clean water off the top ignoring the history, the old, settled murky water, and hope for the best for the future, yet if one looks carefully enough, that history remains for all to see. Frequently drawing on adages or aphorisms when entitling her works and utilising domestic objects to create her installations Mayhew Craddock seeks to reinforce the sense of familiarity, or lack of, between viewer and experience.

The twelve water samples presented in this exhibition show water samples associated with the below listed stories and locations that form a small part of the documented history of this fascinating waterway:

For further information about how this piece of work came into being visit the Musings page.

Special thanks to Sharon Harker and Mike Craddock for helping to collect the water samples, and to The Oxford Times and Oxford Mail archivist, Chris McDowell, for his invaluable assistance helping to source stories about The Oxford Canal from the Newsquest library.