On Saturday I attended a symposium entitled Nothing in Art organised by the Contemporary Arts Research Unit based out of Oxford Brookes University. The symposium was split into two parts, and I attended the earlier one (a pre-arranged dinner date prevented me from staying on), which saw CARU bring together artists and researchers from an array of disciplines and international backgrounds for a day of presentation, discussion and performance on contemporary art and music, theatre arts, anthropological study of art, and writing in art in the Green Rooms, Headington Hill Hall, Oxford.

After little by way of an introduction to the day from CARU’s event organiser, the day kicked off with a presentation by installation artist and sculptor Roger Perkins who introduced himself as the curator of History of The Greenham Holiday Resort, a museum telling the story of Greenham Common, which he proceeded to  describe laboriously through a slideshow of images, an animated panorama of the interior of the museum building, and a video.

Perhaps naively, I was ignorant to the historical significance of Greenham Common, I wasn’t familiar with Roger Perkins as a curator or artist, but I did think that the post WWII Butlins style holiday camp concept sounded pretty plausible. What I was struggling to believe, however, was  the extent to which Perkins was going to to describe this museum, the seriousness of his delivery, and his place in relation to this symposium. As my suspicion/curiosity heightened I turned to the leaflet (as I do when I find myself looking for guidance in museum/gallery environments)  that he had handed out to members of the audience at the beginning of his presentation. The leaflet was in-keeping with the look of the museum – a bit shit in a dated 1980’s kind of over-loaded graphic, text-heavy way. Turning to the back page I noticed the ‘museum’ had been supported by the Esmee Fairbairn Foundation, ACE, Corn Exchange Newbury, Greenham Common Trust, and New Greenham Arts. The penny dropped. This wasn’t a bone-fide museum, this was an installation, and Roger Perkins is an artist presenting a project in character (I think).

We reached ‘Any Questions?’ and my suspicions were confirmed. An interesting project and presentation about truth and one’s willingness to accept without question. Perkins’ contribution to the symposium was entitled, What you see is what you’re told. His website states,

“What we believe and hope to be secure is, in fact, illusory.
But we are very good illusionists.“

It turned out to be an apt and well-placed introduction to the day, and Roger Perkins is indeed a very good illusionist. The work had parallels with Ray Lee‘s fantastasic Ethometric Museum (which featured in an adapted form at the Musical Technologies: Old and New LiveFriday that I co-curated at the Ashmolean with the very brilliant, and very lovely Professor Eric Clarke, Heather Professor of Music at the University of Oxford – a career highlight for me!).

Next up was Oxford-based musician Malcolm Atkins, who I’d met previously through his involvement with Oxford Improvisers, his ‘set’ was billed as Why Morton Feldman is good for nothing. Again, my ignorance prevailed – who is Morton Feldman? Fortunately for me, Atkins had predicted such ignorance might exist in the audience and provided an introduction by way of a captivating performance of Morton Feldman’s compositions alongside Atkins’ own inspired by Feldman, and that of another composer also inspired by / responding to Feldman (I didn’t catch who the other composer was). Simultaneously the audience was drip fed contextual information about the life and work of Feldman on a projector, which was performative in itself as quotes and dialogues dripped onto the screen one letter at a time. We later learnt that this timing was more by accident than design as Atkins had ‘rehearsed’ his presentation using a PC, and the Mac he was using during the presentation/performance was set to a different speed. Regardless, there was a silent synergy that worked, somehow . The gaps in between (the greatness of nothing) were what the presentation was all about, after all – subconscious improvisation in action!

I have to confess that when I learned that Morton Feldman was famous for a six hour-long string quartet performance I wasn’t entirely sure how I might manage Atkins’ 35 minute presentation/performance. But it went by in a flash, and was probably the part of the day that I enjoyed the most,  for all it was slightly disarming. In a 1982 lecture, Feldman noted: “Do we have anything in music for example that really wipes everything out? That just cleans everything away?”

Just as Feldman did so Atkins allowed nothingness in, and enabled the audience to take time out to concentrate on it, acknowledge its beauty and preciousness.  It was a meditative experience, and I found myself fighting the urge to read the text that we were being presented with – fighting the urge to simply be empty.

For all it may sounds slightly ridiculous (Mum, Dad – if you read this!) I genuinely reached an altered state of being during that 35 mins, a state that would have been disquieting had it not been such a treat. It was a state that yoga has never enabled me to access – the closest I’ve ever got to is was probably in 2007 when I was amongst the first to sign up to watch the sun rise in James Turrell’s Deer Shelter Skyspace at Yorkshire Sculpture Park.

Interestingly, and on the meditative front, I then learnt that one of Feldman’s best known pieces of music (Rothko Chapel) was inspired by, and written to be performed, in Rothko’s chapel whose mission is…“to inspire people to action through art and contemplation, to nurture reverence for the highest aspirations of humanity, and to provide a forum for global concerns.” 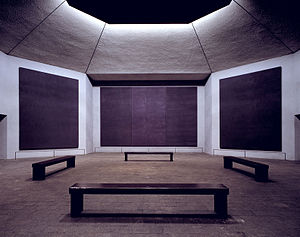 I also learnt that Feldman’s practice was influenced more by visual artists than it was by musicians, and that he spent more time going to museums and galleries, than he did going to recitals. I’m a Morton Feldman fan, and I’m incredibly grateful to Malcolm Atkins for the introduction!

This was followed by, And you said nothing, a very moving and captivating performative presentation by performance artist and theatre maker Stavroula Kounadea.

Stavroula Kounadea is a friend, not a close one, but someone I know, so I’m going to refer to her as Stav – as ‘Kounadea’ feels a bit weird. Anyway, Stav is one of those people whose eyes really look at you. You meet her and feel examined, not in an uncomfortable way, but a way that leaves you in absolutely no doubt that she is attentively, actively listening to you and logging your every word. She is someone that has a profound, perhaps innate or studied (I’m not sure which, I don’t know her that well), understanding of the art of communication.  She talked about expressing the inexpressible through silence and the (Harold) Pinter Pause. And she demonstrated her mastery and understanding of the art of silence, or the everything of nothingness, as she swapped places with the audience and introduced us to an Audience with Stav  as she stepped onto the ‘stage’ and exchanged our eyes for hers. She left the rapid-fire conversational delivery that I am more used to behind her and suspended her audience in the silences that say so much, leaving us hanging on her every poised, and precise word.

Whilst it would have been weird for her to break or to finish And you said nothing with questions, answers or observations (she simply left us in silence, with our own thoughts, of course), she describes her work on her website ,

“I am convinced now that what motivates me to create work that is live and performative is the magic of communicating with other people. The moment when you-the performer, the idea that until recently was just in your head, and all these people in the room actually coexist in reality. It’s almost surreal.

… I like creating work that is vibrant, fresh, witty, thought-provoking and entertaining. I like having fun when creating a piece of work.”

Filling the gaps that Stav left us suspended in, and leaving the audience to decipher an audio visual web, speaker number 4 was Austin Sherlaw-Johnson, who left me bemused… and a little confused. Read a bit about his practice on Nicholas Hedges’ website and see one of his performances at Audiograft 2013 here.

Social Anthropologist, Paola Esposito, introduced us to becoming nothing in butoh dance through her research topic, the anthropological significance of butoh, an avant-garde dance form that emerged in post war Japan, in contemporary Western society. As a concept, I think butoh dance is fascinating – heightening levels of consciousness, becoming physically and psychologically present in an environment, loosing one’s ‘self’ to such an extent that one begins to blend with one’s environment, a place of non-being, a transition from centric to non ego-centric perception.

You know when you want to really like something, and feel that you’re perhaps just not giving something the attention it deserves!? Well, I found this description of butoh on the Sadler’s Wells theatre website, and I tapped butoh into YouTube. I’ve had a read, and a look, and a think… and I think it’s fascinating, and I get it, and I tried it under the instruction of Esposito… It’s just not for me – I didn’t find nothing there, I struggle to find nothing in yoga – horses for courses I guess, I’d be a busy girl if I was into everything I encounter!

Last but not least was the magnetically charming Veronica Cordova De La Rosa who has secured funding to create a bi-lingual (Spanish/English) on-line art journal for creative writing that is as relevant in her homeland, Mexico, as it is here in the UK where she is based. Vibrations is an online space, so effectively nothing – that intangible cyber space that we find ourselves relying on so heavily, for international creative reflection and exploration, and the intention is to ‘publish’ from the site three times per year – read more about it here.

I wasn’t entirely sure what I was going to take away from a symposium about Nothing in Art. A few days later I remain full of gratitude for being able to attend such a fascinating day, free-of-charge, that exposed me to the vast array of nothingness that exists, and the ways in which different artists magnify and manipulate it. A glorious day very well spent!